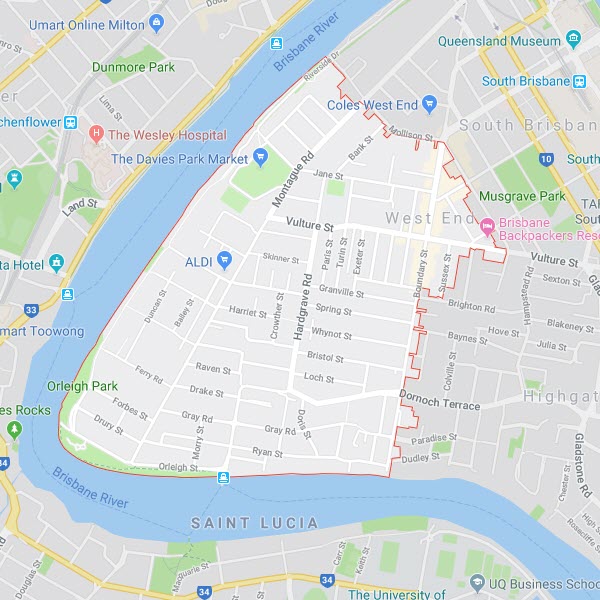 West End is a Brisbane, Queensland suburb located approximately 1 kilometre from the central business district (CBD). This is an inner city suburb known for its quirky urban culture and vibrant social scene.

West End is the perfect suburb for those who want to enjoy the eclectic culture, fashion and food. Fantastically, West End still has the comforts of a suburban lifestyle to enjoy. Public transport provides easy access to the CBD, Universities and other suburbs in Brisbane. The University of Queensland, for example, is just across the Brisbane River.

Unlike neighbouring Highgate Hill, the majority of houses in West End are heritage listed Queenslanders and older brick style homes. This is a suburb that really showcases some of Brisbane’s historical architecture. Due to the increasing popularity, there are also a large number of newly built high-rise apartment blocks and units as found in Highgate Hill. Many of these apartments are centrally located to shops and cafes and are very popular.

Due to its location and proximity to the city, West End Real Estate is highly sought after as a location for professionals and students. It is also a great location for families who want to be near the CBD. The average age of residents is 35, which is 2 years younger than the national average. There are an equal number of female and male residents. Property Managers West End and surrounds, Position One, can help to find appropriate tenants for your property here.

Early English settlers named this lively suburb West End, since it was reminiscent of the West End of London. West End was originally serviced by the tramline, which was opened in 1885. These trams were horse-drawn until 1987 when they became electric. Trams ceased service altogether on the 13th April 1969.

There are a number of Brisbane city bus services that stop at West End. This allows for short 10-15 minute commute to the CBD. West End is also alongside the Brisbane River, which provides access to ferry transport such as the CityCat. The CityCat is a fast and easy way to get to the CBD, the University of Queensland and other Riverside suburbs.

West End is known as one of Brisbane’s most vibrant and social suburbs. It hosts a large bar and dining scene that includes a range of cultural cuisines to choose from. There is also a range of pubs, bars, and nightclubs for those who enjoy the nightlife.

West End is home to a number of music venues, such as Max Watts. This entertainment venue is an 'institution' which hosts some of the world’s largest performers and showcases a large range of local musicians.

For those who enjoy the early mornings, Davies Park hosts weekly farmers’ markets on the corner of Jane St and Montague Rd. These markets are filled with fresh fruit and vegetables, as well a variety of hand made items, such as clothing, jams, and home décor.

There is a number of Brisbane CityCycle’s (http://www.citycycle.com.au/) facilities throughout West End, which allow you to ride along the Brisbane River and some of Brisbane’s most beautiful Southside suburbs.

Although there are only a small number of schools in West End, such as West End State School, It is known as one of Brisbane’s best. There are also a number of public and private schools within close proximity, such as Somerville House, which is located in South Brisbane.

Choosing the right suburb to suit you can be a daunting and challenging task. If you’re interested in West End Real Estate and what West End rentals are available, contact us and we’ll help you find your ideal home.