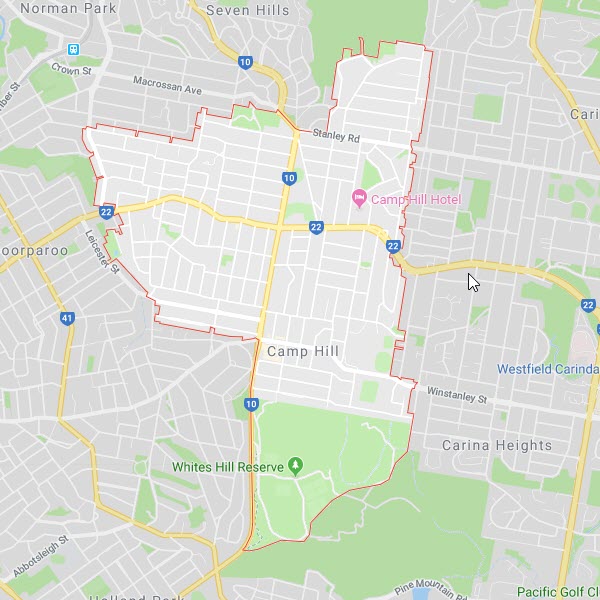 An elevated, breezy and cool suburb in Brisbane, Queensland, Camp Hill is located just six kilometres south east from Brisbane’s central business district (CBD).  So, Camp Hill rentals are always in demand! Camp Hill is a quiet area and is consequently great for young families and retirees. It also suits young people and professionals who prefer to live in a quieter area. First of all, transport is plentiful and getting to the CBD is just a short 10 to 15-minute bus ride. This makes it a great place to live for those who work in the city but do not want to live in the hustle and bustle of inner city urban living.

Camp Hill is suitable for those who want to enjoy the peace and quiet while still having access to shops, cafes and restaurants. There are also a number of parks and play areas that are suitable for young children. This makes this suburb suitable for a diverse range of people.

As Brisbane property managers established in Property Management Camp Hill since 2001, we know this area well.

Camp Hill is a quiet suburb that is perfect for young families.  It also suits retirees, young couples and professionals who prefer a quiet neighbourhood. It is made up of a fine array of beautiful, renovated traditional ‘Queenslander’ and older-style style homes. These really reflect the history of this iconic suburb. Camp Hill rentals also include apartment living for young families or professionals. It is possible to get modern apartment blocks and uniquely designed architectural masterpieces.  Some of these even come with views along the city skyline and Mt Coot-tha.

Most of these homes are stand alone houses, accounting for approximately 86% of the suburb’s dwellings. Townhouses and Units account for about 13%.

The 2011 Census records indicate that there is a median age of 35 years, with an equal percent of male and female residents. A large portion of residents are made up of maturing couples, established couples and young families. As a result, whatever you’re looking for, there is a range of Camp Hill rentals available to suit everyone’s needs.

The suburb of Camp Hill is on an upward trend, probably due to offering residents a variety of beautiful homes, a host of amenities and easy access routes into the city.

The suburb sits upon two hills, Camp Hill and Whites Hill, and was originally developed as an agricultural area with a strong German community.

Camp Hill is a vibrant and thriving suburb that holds a significant importance to Australian and Brisbane History. Camp Hill was named after the travelers that used to camp at White Hill because it was a stopover on the way to Cleveland. The land was mostly used as a stopover and a thoroughfare. The first housing boom in Camp Hill began in 1880’s. Sub-divisions began being sold off and made into housing plots, so making it a sought after residential area.

Similar to Coorparoo, Camp Hill became part of the greater Brisbane Council in 1929. Many of todays structures are based around buildings that were built during the first and second world wars. One of these structures is the hospital which is now known as the Camp Hill hotel. This hospital accommodated up to 3,000 patients and staff and was important during the second world war for soldiers and people affected by the war. Many of the streets are also honored with being named after iconic ships used during these wars such as Sydney, Hobart and Melbourne Avenue.

Camp hill does not have its own train station. However train stations in surrounding suburbs such as Coorparoo and Norman Park are only a short distance away. Despite not having a station, Camp Hill has a large radial bus route that makes it easy to get to anywhere in Brisbane. This includes the CBD and Carindale Shopping Centre from wherever your Camp Hill rental property may be located.

Camp Hill has a large shopping centre located in the White Hill area of the suburb, and includes a liquor store and a Woolworths. There are also a number of cafes, restaurants and corner store in the area. Camp Hill is located just three kilometres from Carindale, which is home to one of Brisbane’s largest shopping centres and movie theatre. Camp Hill is also conveniently close to the Coorparoo retail precinct. Cannon Hill Plaza or Carina Shopping Centre are only a short drive away, adding to the superb range of shopping choices and restaurants available to residents.

A good variety of fitness and health clubs are to be found in Camp Hill. These offer healthy options for improving personal fitness and well-being, providing fun activities and personal attention. The Shirley McMahon School of Ballet is centrally situated on the Old Cleveland Road. Sporting facilities include the Camp Hill Bowls Club and the Mater Hill Cricket Club. Medical services are provided at the Camp Hill Clinic and hospitals in suburbs close by.

Especially relevant for property owners is that our leading role in property management Camp Hill means we are well qualified to manage your investment property here. Do contact us to find out how we can serve you. Our email address is info@positionone.com.au and phone number 07 3843 4511 .

Choosing the right suburb for you and your family can be daunting task. If you’re looking for a quiet neighbourhood that holds a large part of Brisbane’s history, check out the Camp Hill rentals for a home that suits your needs!