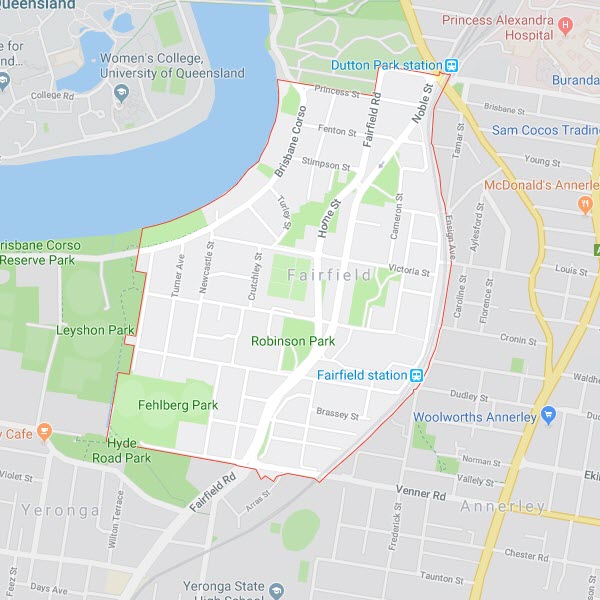 Fairfield is a suburb of Brisbane, located roughly 5km south of the CBD. A beautiful leafy suburb, Fairfield sits on the banks of the Brisbane River. This in-demand suburb attracts a population of mostly young couples and families. Due to its location nearby the CBD, there are also a number of students who choose to live in Fairfield. This is because it provides access to all of the major universities via public transport.

The 2011 census saw that there were an equal number of female and male residents in this suburb. Also, the median age of residents was 31, which is 6 years below the national average. Much like many Brisbane suburbs, there is a mix of housing styles in Fairfield. Like neighbouring suburbs Annerley and Yeronga, styles can vary greatly depending on the street. You can expect to see housing styles varying from heritage Queenslanders, to modern homes and apartment blocks.

Both trains and buses service Fairfield, making this suburb highly popular with those who frequently travel. There is a Fairfield train station on the line to Beenleigh. The main bus service is the 196, which runs every 15 minutes during the day.  The 196 services starts at Fairfield Gardens, the local shopping centre. During the morning peak the 107 and 108 bus services are also available. The frequency of buses is a testament to how easy it is to get around Brisbane from Fairfield.

Fairfield has a number of amenities within Fairfield Gardens. These include a pharmacy, a post office and a Coles supermarket. Due to its location and proximity to the Brisbane River, there are a number of riverside bars and restaurants. Cafes are also dotted throughout the suburb. Fairfield is known for its leafy green atmosphere and has a number of beautiful parks and skating areas for teenagers seeking some outdoors. There are also a number of schools within the area. Such great amenities make this a highly sought after suburb for young couples and families who want to "put down roots".

For the avid readers, there is the Fairfield library, which is located at the Fairfield Gardens shopping centre. It was built in 1988 and refurbished just 7 years ago in 2011. This makes the library a perfect place for students, and families who want to take their kids on an educational outing.

Fairfield is a highly sought after suburb of Brisbane, located only 5km from the CBD. This leafy, riverside suburb has a number of amenities and is serviced by both the train line and Brisbane buses.  So, it's easy to commute or travel to other areas within Brisbane City. If you are interested in available rentals or are interested in purchasing a home in Fairfield, give us a call on 3843 4511 for a chat!

We have offered Property Management Fairfield services to property owners in this area since 2001.  We would love to manage your property! Call 07 3843 4511.