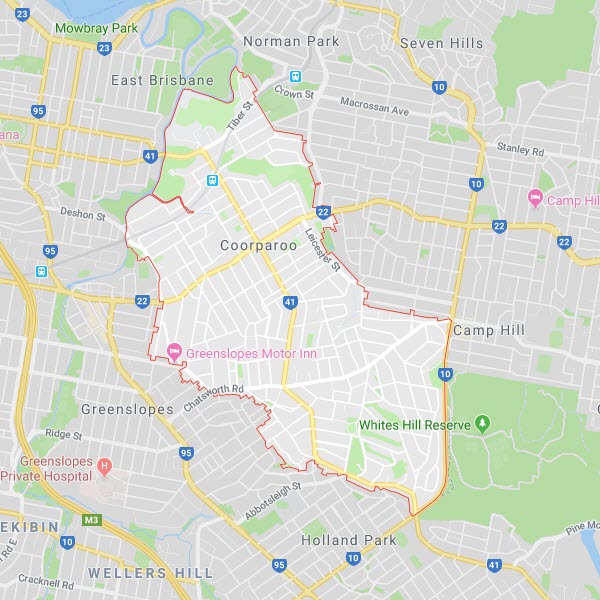 Coorparoo is a suburb in Brisbane located just 4 kilometres from Brisbane’s Central Brisbane District (CBD). Situated on the south-eastern side of Brisbane, Coorparoo enjoys easy access to Brisbane central.  Access is easy along either the Story Bridge or the Southeast Freeway. It’s slightly closer to the city and more urban than suburbs such as Camp Hill. As a result, it is perfect for those who want to enjoy the quieter lifestyle of the suburbs while still being close to the city. Coorparoo is known for its hilly pockets, as well as its stunning architecture and art déco style homes.

A once quiet and unknown suburb, Coorparoo is increasingly becoming one of the sought after locations. Coorparoo is now a fashionable choice in the trend towards inner city living. It appeals to young couples and professionals who are leaning towards Coorparoo rentals for shorter travel time and commute to the city. Our extensive experience in property management Coorparoo means we offer expert services to manage your investment property here.  And we have all the information to advise tenants on renting here.

Coorparoo is close to the city, but still maintains that suburban feel. Its population is a combination of families, young singles, younger couples and established professionals. Over 42% of households in this area are comprised of couples without children. 36% are couples with children. Although there are currently a smaller percentage of young and mature families, the number of parks and schools make this an ideal location for those families who still want to be close to the CBD.

The 2011 census recorded that the median age of the population was 33. This is 4 years younger than the national average. There is also an equal amount of female and male residents.

Coorparoo is filled with beautiful Queenslander style homes, heritage post-war houses and new apartment buildings. Consequently, this makes the suburb suitable for an array of people with different tastes. Stand alone houses account for nearly 50% of dwellings in this area, and units account for a further 46%. There are a large number of medium density unit complexes as well as renovated houses in this area.

This suburb’s name stems from the aboriginal word Kulpurum for Norman Creek. Coorparoo is one of the oldest suburbs in Brisbane.

During a public town meeting in 1875, Coorparoo was chosen as the name of the suburb. Before this, it was known as the Four Mile Camp. Suburb growth began when the land began to sell off in the 1850’s, which was sold from the parish of Bulimba. In the 1880’s a land boom was seen, where sub-divisions were offered to the public.

The addition of the Stanley Street Bridge and the Stanley bridge estate made this area more attractive to potential buyers. At this point, Coorparoo was still part of the Bulimba divisional board, however, due to the vote of the majority, the shire of Coorparoo was eventually created. After World War 1, the property market in Coorparoo began to boom, which has only continued.

The main transport available in Coorparoo is train and bus. The Coorparoo and Buranda Railway Stations are both useful to residents of Coorparoo. Coorparoo railway station is located on the Cleveland line and was opened in 1996. Furthermore, there are also a number of bus routes available that make it easy to get anywhere in Brisbane. Access to the CBD is easy as is access to Stones Corner, the airport as well as universities such as QUT.

Coorparoo is a thriving hub for cafes and restaurants. There are a number of great coffee shops for those who love their morning cup! Also, Coorparoo is just a short drive or bus ride from Stones Corner, which is known for its restaurants and bars and is a favourite drinking spot for those who enjoy the nightlife.

Trendy Stones Corner retail fashion outlets and the Greenslopes Shopping Centre can be found close by on Logan Road. Major shops can be found on the Old Cleveland Road and many small businesses, banks and retail outlets also serve the surrounding suburbs.

Coorparoo is served well by churches, most noteworthy being the historic Coorparoo Uniting Church on the corner of Cavendish Road and York Streets.

Giffin Park in Coorparoo is home to AFL Queensland. In addition there are a wide range of sporting facilities available within Coorparoo and nearby, including golf, athletics, netball and bowling clubs. Fitness and health clubs and a range of healthy world cuisine restaurants add vibrancy to the Coorparoo community.

For many years we have had a leading role in property management Coorparoo.  This means we are well qualified to manage your investment property here. Do contact us to find out how we can serve you. Our email address is info@positionone.com.au and phone number 07 3843 4511 .

Finding a suburb to suit your needs is an important part of house hunting. Are you looking for a suburb that is part of Brisbane’s cultural heritage and still close to the CBD?  All whilst still maintaining the feel of the suburbs?  Then, Coorparoo may be for you. Be sure to check out Coorparoo rentals for a home that suits your needs!

We have offered Property Management Coorparoo services to property owners in this area since 2001 and would love to manage your property! Call 07 3843 4511.