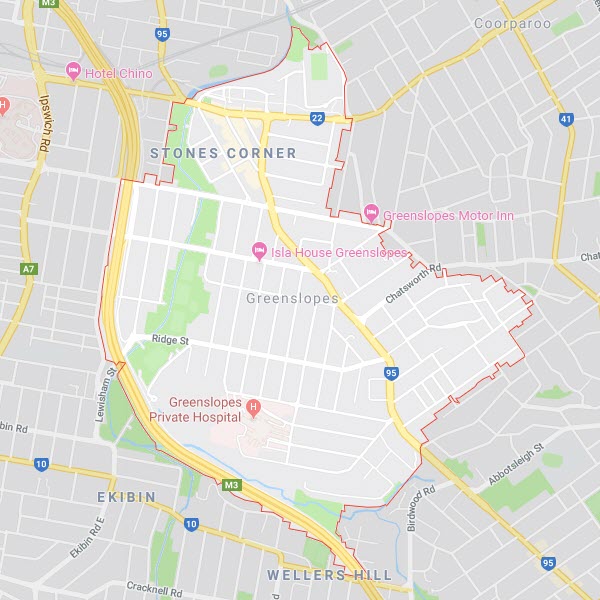 Greenslopes is a suburb located in Brisbane, Queensland just five kilometres from Brisbane’s central business district (CBD). Greenslopes is known for its hills and mountain-like landscapes and resulting appealing atmosphere. The urban feel of this suburb is surprising to some, given it is so close to the city.

The suburb is made up of both residential housing and commercial and industrial areas. It is the perfect location for those who want to live in a slightly more urban location. Not everyone loves the noise and hustle and bustle of other inner city suburbs. Greenslopes also incorporates Stones Corner, a former suburb of its own that offers trendy restaurants, cafes and bars.

The close proximity to the city and the M3 Motorway makes this location ideal for those who commute to the City. In addition, other areas of Brisbane are equally easy to reach. Greenslopes Hospital makes the suburb consequently very popular for nurses, doctors and other medical professionals. Position One Property's expertise in property management Greenslopes means we can cater for each of these professions.  We are able to provide for any rental needs they may have.

Greenslopes is an old Brisbane suburb named after the farming land and estates that it was originally used for. Before Greenslopes was a suburb, the area belonged to Frederick Weckner. The same as many Brisbane suburbs, this occurred when Greenslopes joined the Greater Brisbane in 1925.

A most noteworthy part of Greenslopes history is centred on the Greenslopes Hospital. Like many Brisbane hospitals, it was built during World War II to provide care for the soldiers and those affected by the war. Building on this history, it has since remained in use. Greenslopes Hospital is known as one of the best in Queensland.

Greenslopes has been a thriving hub for a very long time, and as a result the housing types vary widely. You'll find beautiful Queenslander style homes and historical heritage listed houses here. Yet large modern buildings and apartments sit comfortably alongside. Greenslopes is primarily home to independent youths, maturing and established professionals and retirees. There is an equal amount of females and males. The median age of residents is 32, which is five years younger than the national average. Position One Property are experts in property management Greenslopes and surrounding suburbs.  So, finding the right type of rental property for residents with different accommodation requirements is something we do on a daily basis.

Due to its proximity to the city and the motorway, Greenslopes has good access to other Brisbane suburbs and surrounding areas. Greenslopes is situated along The South Eastern Busway (The Busway), which allows for an easy 10-minute bus ride into CBD. Although Greenslopes does not have a train station, it is situated closely to suburbs that do, such as Park Road and Toowong.

Clearly, one of Greenslopes’ major amenities is the hospital. This makes Greenslopes the perfect home for medical professionals who wish to live close to work.  And, it's also ideal for for those who need to be close to a hospital.

There are a large number of cafes, restaurants and bars. This is the perfect suburb for those who like to go out! For those who like to stay and shop local, there is the Greenslopes Mall on Logan Road. The mall includes a Coles, BWS, clothing stores, cafes and a chemist.

Although there are only a small number of schools in Greenslopes, surrounding areas include some of Brisbane’s most reputable schools. Schools such as Spring hill, Toowong, Coorparoo and Wooloongabba are all within easy reach of Greenslopes rentals. These are all within five kilometers of Greenslopes. This makes Greenslopes a great place to live for those families who wish to be close to the city while having access to great schools, shopping centers and healthcare.

Interested in living in an appealing urban area that is close to Brisbane city? You must see what's available in houses for rent Greenslopes. Visit our Properties for Rent to find your new home today!

We have offered Property Management Greenslopes services to property owners in this area since 2001.  We would love to manage your property! Call 07 3843 4511.