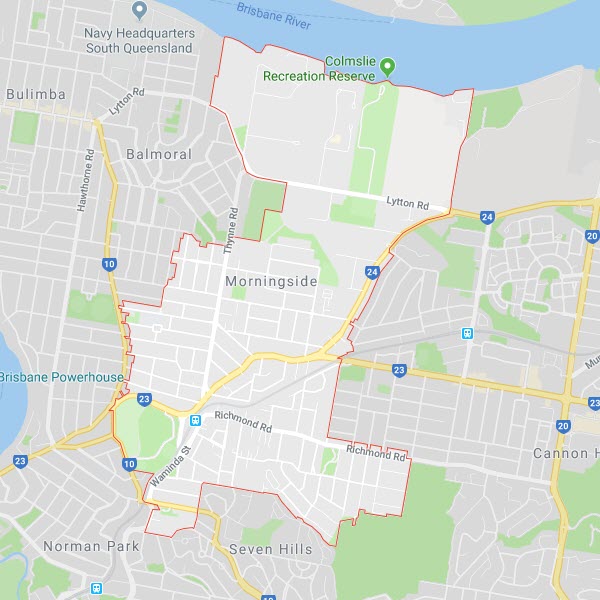 Morningside is a Brisbane suburb to the east of the City. It is located just 5 kilometres east from Brisbane’s central business district (CBD), or approximately 8 kilometres drive away. Much as other suburbs along the Brisbane River here, residents are able to enjoy the close proximity to the City. At the same time, they're also able to take advantage of the community atmosphere that the suburbs afford. Morningside borders suburbs such as Cannon Hill, Norman Park and Hawthorne.

Due to its location and amenities, Morningside is great for independent youth, young couples, retirees and families who enjoy living close to the city while still enjoying the suburbs.

Morningside is one of Brisbane’s old standing suburbs, where many of the houses date back at least 50 years. Currently, Morningside is largely made up of heritage-listed houses, older weatherboard or chamferboard style homes supported by wooden stumps. In recent years there has been an increase in the number of more modern semi-detached houses, duplexes, units and townhouses. The diversity of housing types makes Morningside suitable for almost anyone wishing to be close to the city but who prefer a more suburban lifestyle.

Like many older suburbs in Brisbane, Morningside has seen a great deal of renovation activity as workers’ cottages and Queenslanders are modernised or renovated.

A majority of residents are independent youth, young couples and retirees with a smaller percent of young families. The median age of residents is 35, which is 5 years younger than the national average. There are also an equal amount of female and male residents.

Morningside is one Brisbane suburb where prestige property is abundant, as well as affordably priced homes. The size of blocks varies in Morningside. The most prestigious homes are often situated on blocks in excess of 2000 sqm, while the most affordable on under 500.

The fact that the area is close to the more prestigious suburbs of Bulimba and Hawthorne has attracted a large number of younger couples. They have moved into Morningside to capitalise on its relative affordability. There is always the possibility of benefitting from the “ripple effect.”

Before becoming a suburb, Morningside was an estate, which is where it got its name. Settlers used Morningside in the 1870’s for mostly agricultural uses, such as farming dairy and growing sugarcane. Morningside soon became popular as a residential area after the post war boom. It has since become a highly sought after East Brisbane suburb.

Morningside has a number of bus routes along Wynnum road.  However, the main means of transport is by the Morningside railway station. This station connects Morningside to the Cleveland line, making transport to the CBD and other areas in Brisbane easy.

Two main shopping centres coexist in Morningside and they provide supermarkets, banks, bottle shops and hair salons. There is also the Colmslie pub, which is located next to the Colmslie Plaza.

Morningside has one primary school and two high schools, making it a perfect choice for those families that like to be close to the city. Despite there being only one primary school, neighbouring suburbs have a number of schools to choose from including state and private options.

If you’re interested in what's available in rentals Morningside, Cannon Hill and Norman Park way, call us and we’ll help you find something to beautifully suit your needs.  Our experience in Property Management Morningside and surrounding suburbs goes all the way back to 2001!