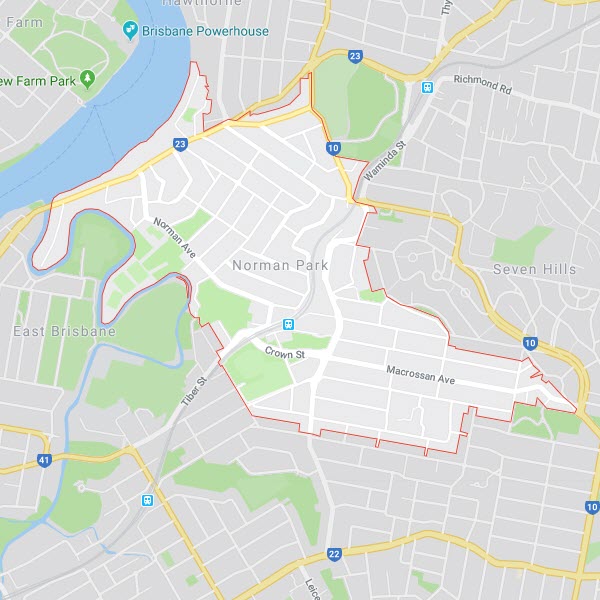 Norman Park is a popular Brisbane suburb situated just 4km to the east of the Central Business District (CBD). It borders suburbs such as Camp Hill, Wooloongabba, Hawthorne and Morningside. Norman Park is within close proximity of the CBD, CP Bottomley Park, and the Brisbane River. Some properties in Norman Park even having beautiful riverside frontages. It's a suburb that's perfect for families and young and mature couples. Naturally, professionals looking to be close to the CBD look for houses for rent Norman Park way.

Firstly, the C.P. Bottomley Park in Halifax Street is a popular recreation area. Furthermore, there are also parks along Norman Creek towards East Brisbane which are very popular with locals and visitors. Norman Park is in close proximity to many amenities, walkways, bikeways, barbeque and picnic spots. Hence,these many features make this suburb a superb choice for inner city living.

Due to its convenient train station and bus routes, Norman Park is also perfect for those who work in the CBD. The same transport options also make it easy for those that need to commute to Brisbane’s outer suburbs.

Similar to other suburbs such as Camp Hill and Coorparoo, Norman Park is made up of a variety of housing styles. Largely made up of Queenslander and heritage style houses, urban apartment blocks, newly built townhouses and traditional post-war cottages. 81% of the dwellings in this area are stand-alone houses. Units account for around 15% of the total dwellings. The diversity of housing styles is another reason Norman Park a highly sought after and popular Brisbane suburb.

Norman Park is home to young couples and families, as well as a smaller percentage of retirees and mature couples. There are an equal percent female and male occupants and the average age of the population is 33, which is four years younger than the national average.

Norman Park started taking in settlers in 1853. However, the development and growth of this suburb was initially slow. This could partly be attributed to the Brisbane floods in 1893, which caused the suburb to nearly cease all together. Norman Park remained largely rural until after the World War II. After the war, a rapid development of public housing and construction took place. As a result, large residential growth took place. In 1950’s and 1960’s, low-lying areas were turned into parks and playing fields, making this suburb a perfect fit for families with young children.

The beautiful heritage-listed single story house “Eulalia”, built in 1889, stands in McIllwraith Avenue. The Early Street Historical Village, once a popular museum, operated on the grounds of “Eulalia” from 1965 to 1998.

Norman Park has three radial bus routes that pass through the suburb. This makes access to the CBD and other areas in Brisbane effortless. It also has its own train station that is located centrally and has the Cleveland line pass through it. Norman Park is well serviced and is perfect for those who need to commute or get around Brisbane with ease.

Norman Park offers a large range of local stores on Bennetts Road for convenient shopping and for residents who wish to stay local. It is also within close proximity to the Cannon Hill K-mart plaza offering over 40 specialty stores and the Coorparoo retail precinct, comprising Coles and Myer Mega Mart stores, as well as other supermarkets, banks, and clothing stores. There are also regular bus services to the Brisbane CBD or Carindale shopping centre, which are only a short ride away.

Schools in Norman Park include the C& K Norman Park Community Pre-School and Kindergarten, Norman Park Primary, the Agnew School, and the area has access to a range of schools in the neighbouring suburbs of East Brisbane, Seven Hills and Morningside. . The Griffith University Morningside campus is also just a few minutes away. Consequently, you are spoilt for shopping choice in this location!

Popular website www.ourbrisbane.com is a great source of information on Norman Park.

The Brisbane Goju Karate School is situated on Wynnum Road. Most noteworthy - "The Gabba" is a popular nearby sports facility. Health and fitness clubs, the Metropolitan District Netball Association and Morningside Services Club are some of the local healthy lifestyle facilities available to residents of Norman Park.

When searching for your new home, finding the right suburb to suit you and your families needs is important. If you’re looking for a suburb that is within close proximity to the city, has access to a number of schools and universities, and has well-serviced public transport, check out Norman Park rentals for a home that suits you!

Our experience in Property Management Norman Park and surrounding suburbs goes all the way back to 2001!  Call today on 07 3843 4511.