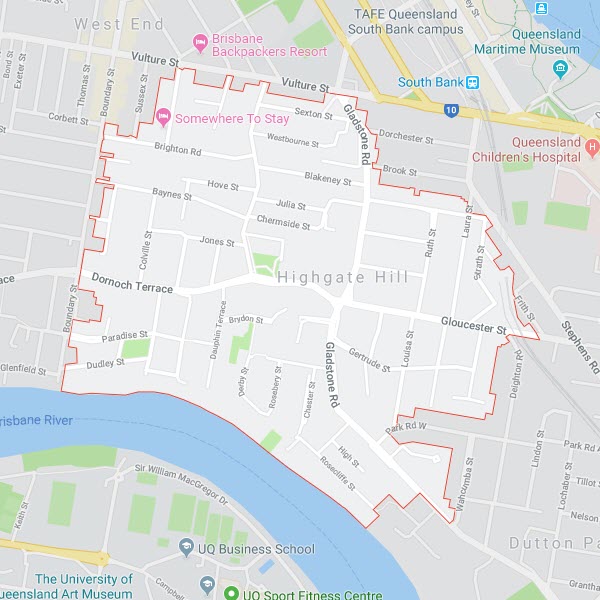 Highgate Hill is an inner Brisbane suburb located a mere 2 kilometres from the central business district (CBD). This is a desirable riverside suburb, known for its leafy green streets and high-rise apartment blocks.

Highgate Hill is the perfect suburb for professionals needing to commute to the CBD. For those who enjoy apartment living, this is an ideal suburb. Highgate Hill provides the practicality and convenience of an inner city suburb while still maintaining a suburban lifestyle feel.

The majority of housing styles in Highgate Hill are high-rise or smaller apartment blocks. There are also a number of older Queenslanders and heritage listed brick homes. A large number of these have been renovated or modernized.

Due to its proximity to the CBD and the Brisbane River, Highgate Hill is a highly sought after suburb for professionals and students. The median age of residents is 34, which is 3 years younger than the national average. There are an approximately equal number of female and male residents.

Historically, Highgate Hill is one of Brisbane’s younger suburbs. There were several decades between the European settlement and when the first residential houses were built. The name Highgate Hill originates from one its first residents who lived at the top of Bellevue Street.

Due to Highgate Hill’s topography and location, the 1960’s saw a large increase in apartment blocks. These were popular because they allowed for city views. They also provided housing to the increasing number of residents in the area. By this time, the City was getting busier.

A number of Brisbane city buses service Highgate Hill. The Bus services allows for quick and easy access to the CBD and other Brisbane suburbs. Due to its location, residents are also able to use the CityCat. This and other ferries allow access to the CBD, The University of Queensland and other Riverside suburbs.

There are a number of shops and amenities in Highgate Hill. A supermarket, a chemist, a post office and clothing outlets provide convenience for locals.

Highgate Hill is also within close proximity to South Bank, a hub for Restaurants, bars and cafes. There are also the Imax cinemas in Southbank.

For those who enjoy the food and bar scene, West End is just the next suburb over. West End is known for its pubs, bars, restaurants and music venues. There are also weekly markets that are known as some of the best in Brisbane. These are located in Davies Park.

Although there is not a large range of schools in Highgate Hill, neighbouring suburbs such as South Brisbane are home to some of Brisbane’s best. This makes Highgate Hill a great suburb for young couples and families. Anyone wanting to enjoy the suburban lifestyle, while maintaining a close proximity to the CBD, will love Highgate Hill.

Should you be interested in rental property in Highgate Hill, Position One Property are experienced property managers here.  We invite you to Call Us on (07) 3483 4511 or Contact Us via the Form on our website HERE.

We have offered Property Management Highgate Hill services to property owners in this area since 2001. We'd love to manage your property! Call 07 3843 4511.